If you spot one, shame them into owning up!!
If you are new to the Lotus position introduce yourself here. Please try to keep your the post to your introduction and your initial question/problems to the right formum.

KevW wrote:Re the dimmer/rheostat I'm not 100% sure but I don't think those leds can be dimmed. They are either on or off.

Correct. LEDs are either on or off - dimming effect is produced by using square waves with varying durations of on and off pulse to give the effect of reduced brightness. It's all quantum.
https://www.lotusexcel.co.uk/
SORN - just say NO!
Top

So is it possible to install them without any risk also with a working rheostat ? Or has this always to be set on full energy?

don.hasi wrote:So is it possible to install them without any risk also with a working rheostat ? Or has this always to be set on full energy?

It's been a while since I built any LED circuits, but from memory, if they're in series with a variable resistance (rheostat) they will stay at full brightness until the voltage drop across the rheostat is so high that they don't trigger at all. In effect, the rheostat becomes an extra switch

Depending on the type of LED used, wiring them in series like that could result in damage to them.
https://www.lotusexcel.co.uk/
SORN - just say NO!
Top

It's also been a long time since I looked at LED circuits but you can adjust brightness via an extra circuit that relates to current control.
If memory serves.... "Buck" or "Boost" circuits are what is required.
I will have a look tomorrow on this one as I have a few kicking around at work.
Top

This might work - Pulse Width Modulation , but must be supplied by own supply circuit - if I read the blurb correctly

Just Taxed the car - Check out the tax Disc 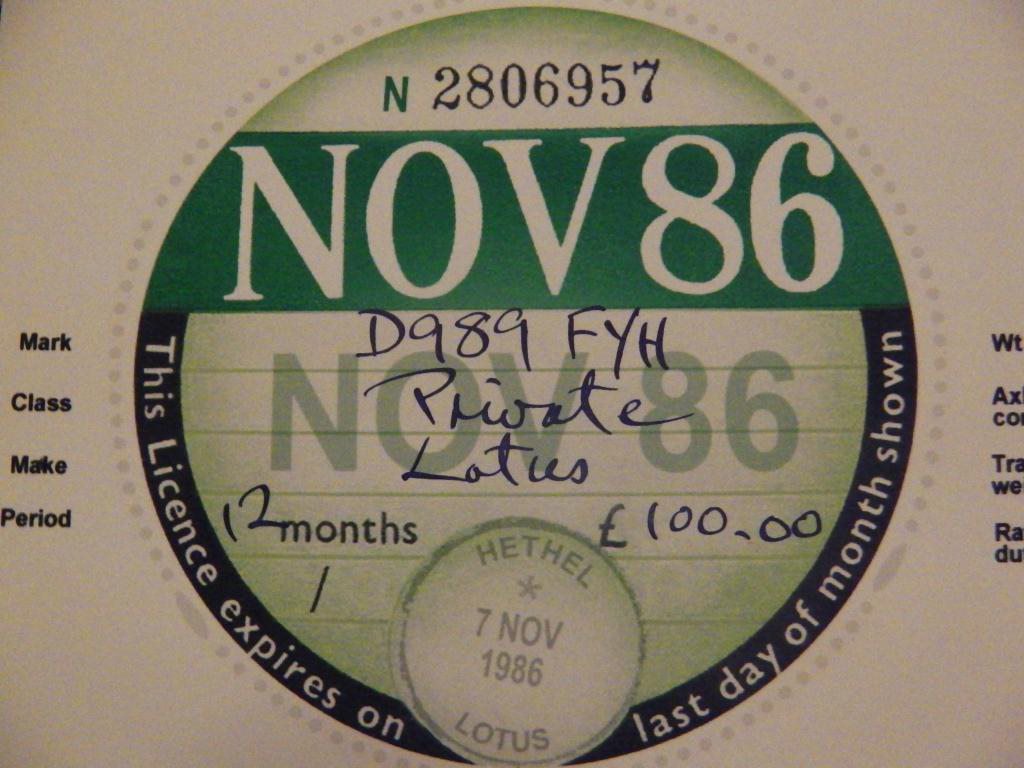 Well, if I was right all the time I'd get to be predictable!
Top

If I still had my 76 Elite it'd be tax-free next year!

Do you have just changed the bulbs with the LED or do you have made a new circuit?

don.hasi wrote:Do you have just changed the bulbs with the LED or do you have made a new circuit?

Just replaced the bulbs with equivalent sized LED. I have no dimming function as previously discussed but don't mind
Umm! What to do next?
Top

Tinkering with hi-level brake light. Taken from a Rover 45 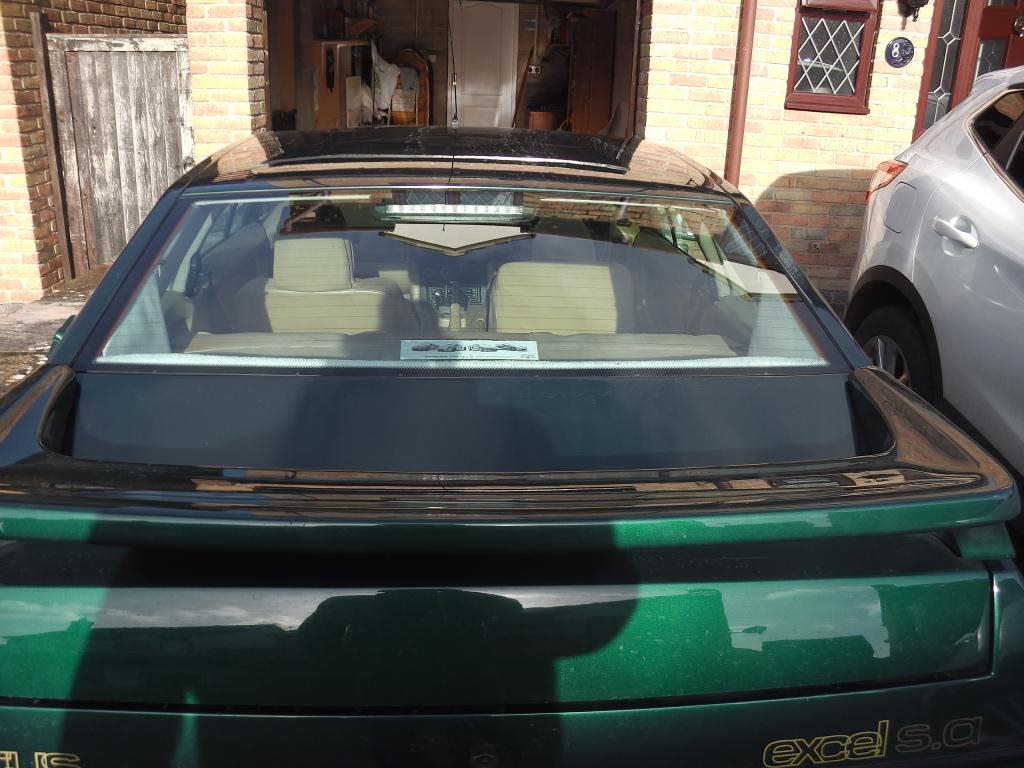 It's 1.5 cm too left but I wanted to cap the house roof reflection perfectly

Doesn't obscure the rear view too much - never use mirrors anyway 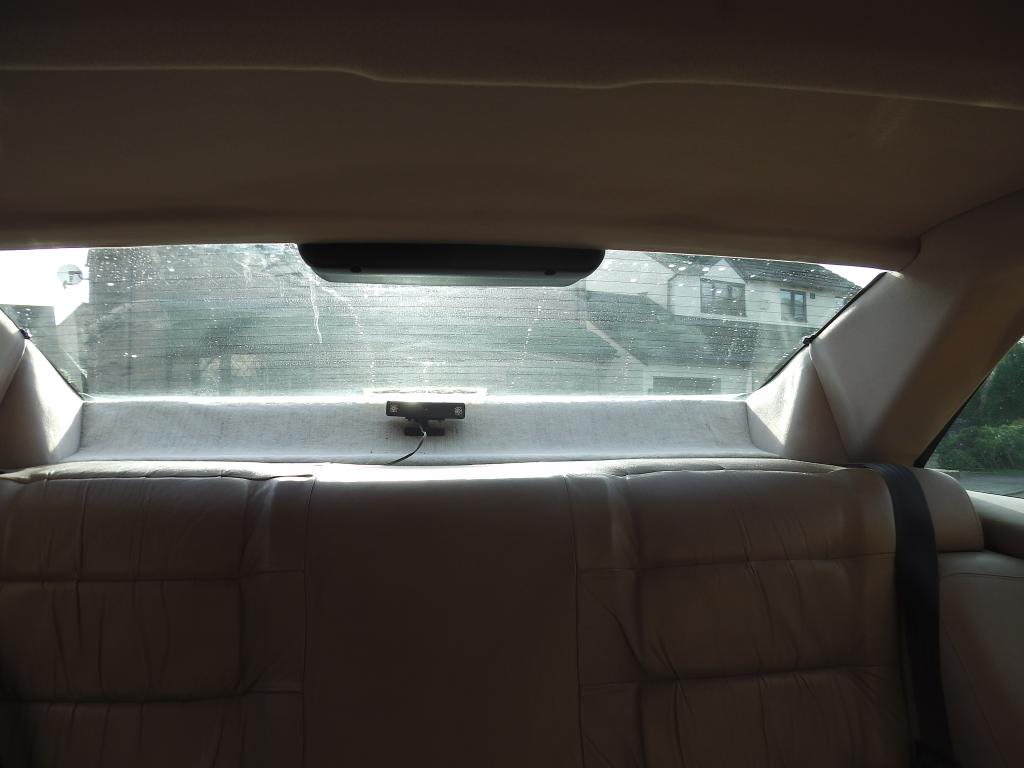 Today's likkle tinkerings. Bought some Jaguar XJS Cabriolet Recaro seats from fleabay. They are a easy fit - almost. The track holes are bob on front to rear, but the width span is 13mm too narrow - 1/2 inch in old money. First I removed the seat belt anchorage point by drilling off the rivets - there were 2 for each seat to allow a swap to LHD. I took a 15 inch length of 40mm steel bar and drilled 2 holes 13 mm apart 25 mm from each end. One 9mm the other a tapped M8 (6.8mm start). Into the 9mm hole I welded countersunk tensile bolts 70mm long. (these can be a little shorter). The bar was then bolted to the inside seat rail on each seat with the welded bolts on the outside. This moves the seat away from the tunnel and gives better clearance as shown below. It was then a lift in and drop in with relative ease. The fixed bolts removed the hassle encountered with the loose originals. Observations post fit: The slight tilt is un-noticeable. The fore to aft movement is not as great as the originals. I may be blocked by the head of the track bolt catching on the runner stop, but the drive position is set for me so not to worried at the moment. 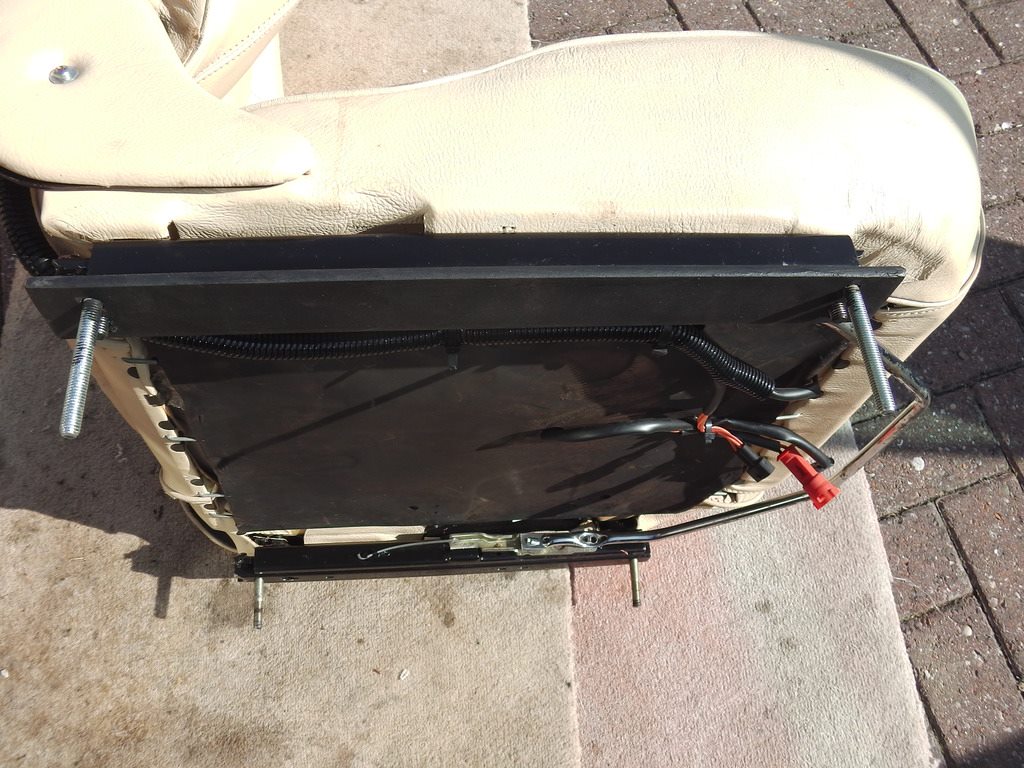 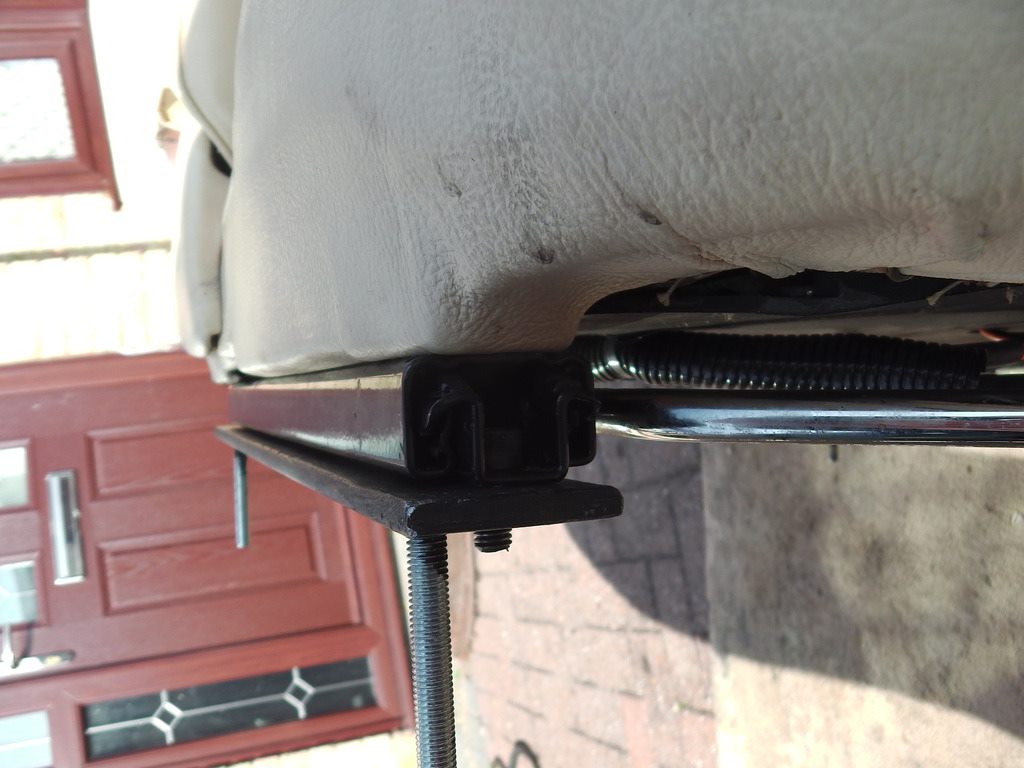 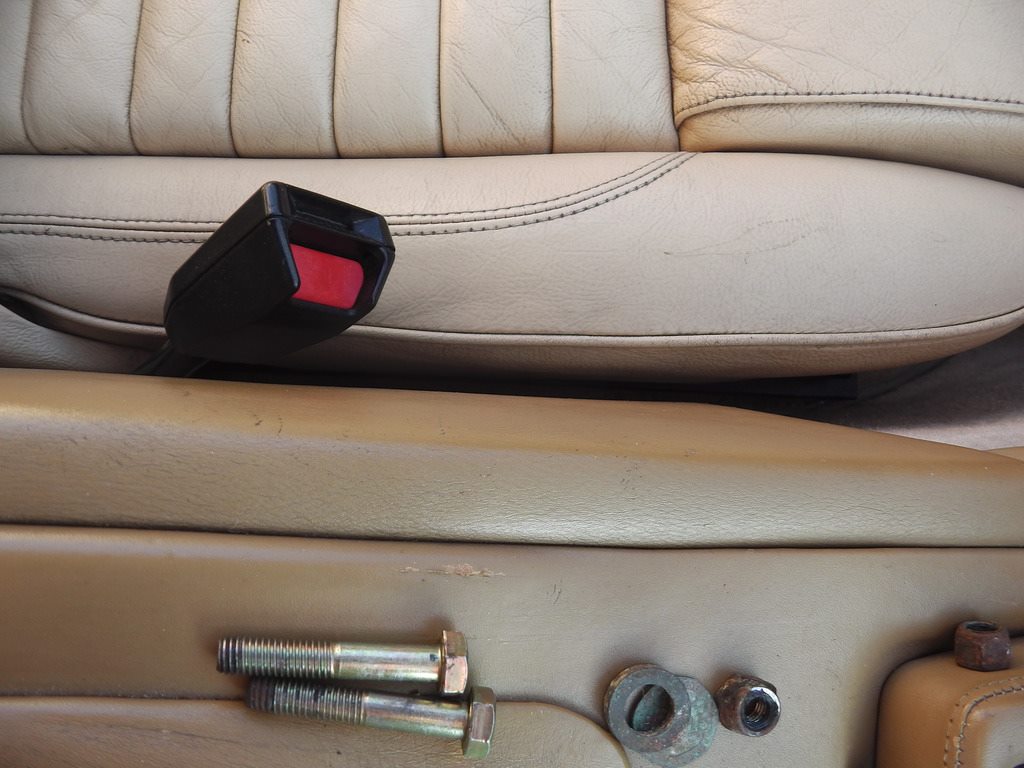 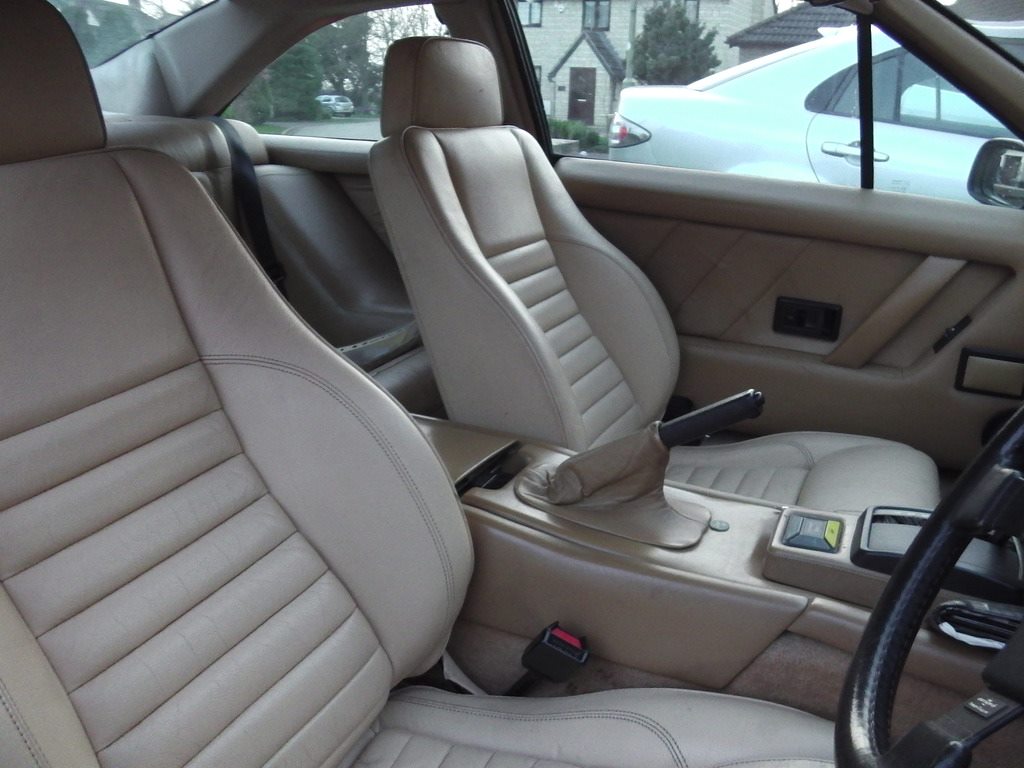 To finish I will be slowly working out the electrics for the heated panels and lumber motor
Last edited by Hawaiis0 on Fri Sep 22, 2017 21:42, edited 1 time in total.
Umm! What to do next?
Top

Nice Job . Are you doing the electrics ?

Busy weekend at the NEC; couple of shots of the job done. Having prepared the weekend before by cracking all the bolts and dismantling the hubs and discs the Brake Kit from PNM went straight in no bother. The bleed was a mess due to mis-aligned seal on the bleed kit

only time will tell on the paint work 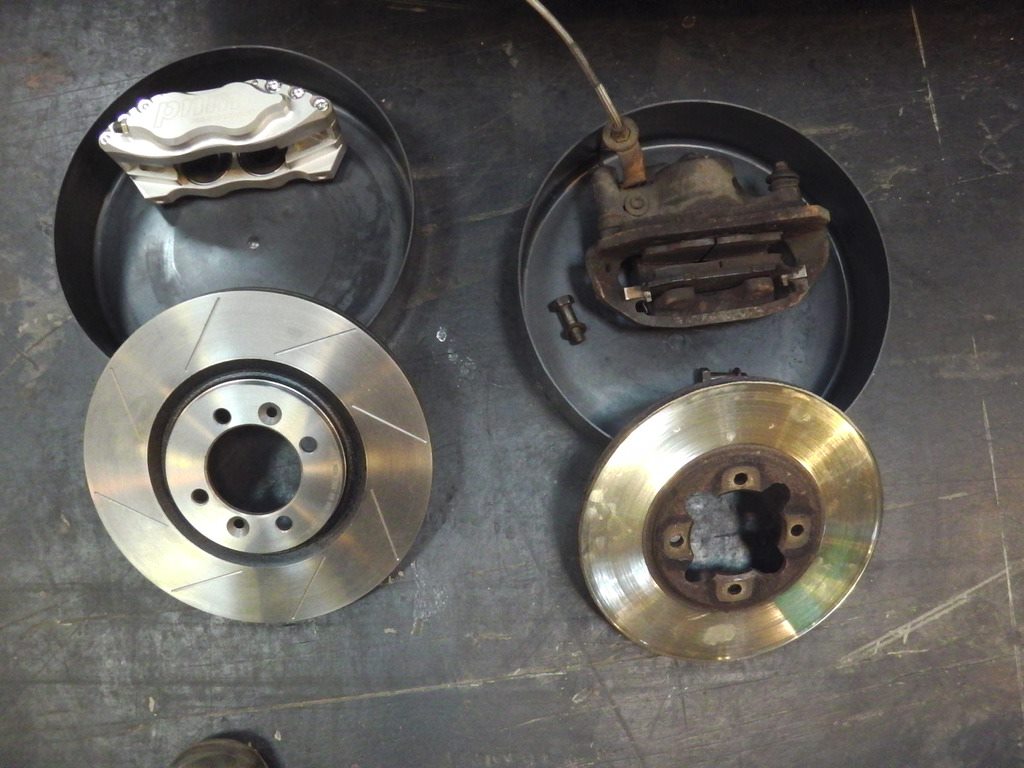 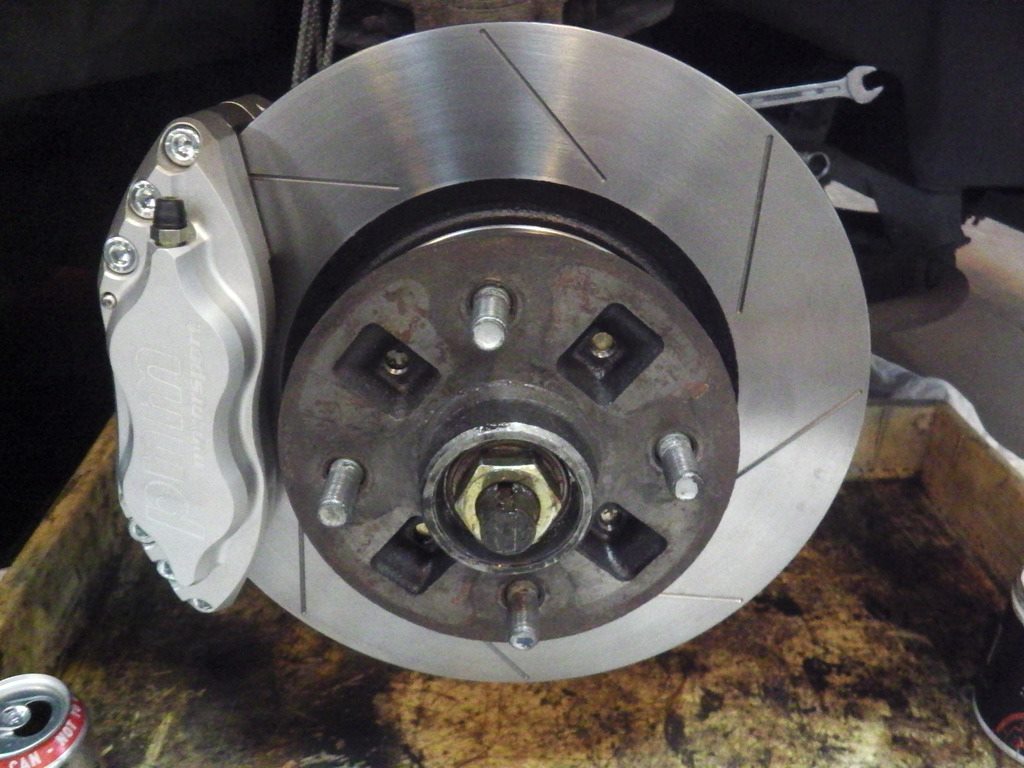 I have been tinkering again and have come across the reason for our poor performing tail lights. I believe the problem lies not with the old incandescent bulbs but with the quality of the reflectors in the unit.

You can see below that there is almost no rear reflector to amplify the light intensity due to poor silvering of the bulb cavities. Merely 80's spray paint technology. 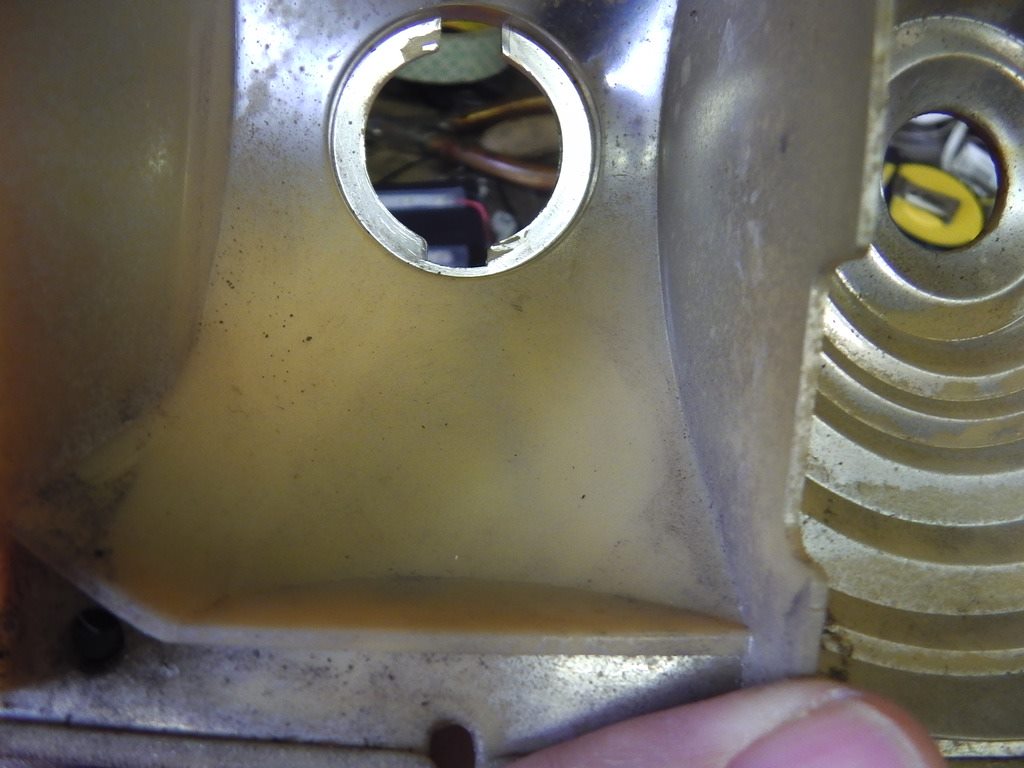