General Excel discussions. You may also post Eclat and Elite information here. If there is enough call I will set up new categories or even a new BB for them.

Thanks Pete - would have been a whole lot easier to make if it hadn't been broken and I knew where the bolt was supposed to end up.....the parts list shows the bolt to be 6" long, but I can confirm that it is too short - next size up available here was a 7" one, so that's what I used.

Christmas a bit early this year - this rocked up on the weekend - now to see how well it fits! 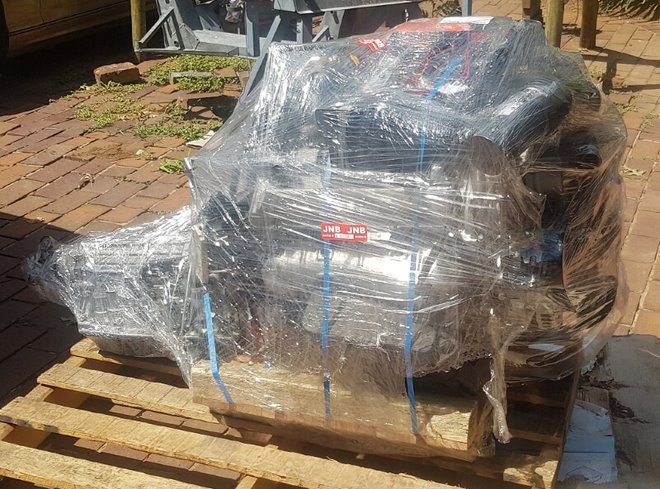 That's a big lump.
Looking forward to seeing it sitting in the chassis.
Tony
What goes together.... Must come apart.
Top

Will have to see how well it fits in the chassis, and then in the body as they are separated still - hopefully it will give me some idea of what needs to be thought about - am expecting a few things!

Trial fitting the drive train was done on the weekend - it's a tight fit and some work will need to be done to get it all in. Lengthwise the unit fits in with about 20mm to spare.

The transmission mounts were the first casualty - otherwise although a tight fit and some small clearances at the rear of the gearbox, it fits (the pink plastic bags contains all the electronic bits).

All tight from the front as well, but the engine currently sit about 10 to 15mm above the underside of the bonnet, so it needs to come down a bit still, but....

the bottom of the sump is catching on the front cross member.

By lowering the engine to clear the bonnet, the sump would be sitting on the cross member (ignoring the curved interference bit for now). The plan is to cut a section of the cross member out, rotate it 180 degrees and lower it 20mm, to give the necessary clearance, as well as to add in some extra strengthening. Cross member should end up looking something like this: The oil filter will also need to be relocated as it ends up where the steering rack is.

I'd modify the sump, not the chassis. How close will the exhaust manifolds get to the chassis/body? Looks like it might be tight! Looking good though

Thanks Pete - the sump over the cross-member is already at a shallow point - not sure how shallow it can go before it's too shallow and not doing its job - or hitting some important moving bits.

The exhaust manifolds don't fit as they exit backwards where everything narrows - they will need to be modified to exit down and more towards the middle. They are stainless so may be able to be cut and reshaped somewhat.

I looked into fitting one of these prior to fitting the Rover V8 but there were a couple of things that put me off.... but that another story and Im boring enough as it is. You need a different sump, if you have a look on the internet for these engines there are at least 3 different sumps that are commonly called front, centre and rear sump, I would guess yours is a centre one from the images. Its a few years ago that I looked into this but from memory I think the rear sump version was only fitted to the V8 soarer that Lexus produced with the 1UZ under the bonnet. Its not a totally rear sump bowl, more of a a rear centre one but when I measured my car up I thought it would fit. I thnk that the 3UZ uses the same block ( again from memory ) so it should fit.
Have a look at this link, theres lots of info there. A fabricated sump was also an option because although the sump is cast which is usually there to add stength it doesnt really matter with these engines because of the ultra strong bottom end on them, some tuners in the US have had close to 900hp out of these engines on a stock bottom end.

Bash
https://www.lextreme.com/forums/index.php
You are only young once but you can be juvenile all your life !!
Top

Thanks Bash - have read through your build a few times as well - thanks for taking the time to put the info on the forum.

I've been to the lextreme forum quite a bit already trying to get my head around things which can take a while sometimes - the gear lever is the next head scratcher!

I have looked into the sump issue a bit, and will have another look at the sump I have when I get home again, but the red arrow in the picture denotes the clearance between the cross member and the sump which is about 15mm at the moment. The green arrow represents the depth of the sump - I'm not sure that can be made any shallower???Pictures I've looked at seem to show the crankshaft going below the level of the block - but I don't know if this is really the case and if it does, by how much.

Changing the sump to a more rearward based one would help the clearance issue at the orange circle, but wouldn't change the problem of the cross member clearance, bearing in mind I'm already sticking out the bonnet....

If the sump can't be made thinner, then I'm left with either a higher bonnet (adding to all my future fiberglassing work!) or a lower crossmember (and some metal fab and a lot of welding).....

In my opinion the cross member is the weakest part of the Excel chassis as it has to support the Bending Moments induced from
the Wheel spring turrets. Any reduction in depth reduces bending resistance to the third power. There is no room for a strut over
the spring turrets as usual strengthening.
Any inward movement of the struts condems wheel geometry and you could get collapse on to the body/engine.

How about a dry sump, just a suggestion.

Please take my opinion as positive to find a way to install your engine, I admire your effort.

The issue of bonnet clearance was the main issue that put me off because I didnt want to change anything body or chassis wise on the car. I did think of cutting the crossmember and inserting a welded in thick wall tube but the changes were too much for me but dont let me put you off its great what you are doing, keep at it.
I also looked seriously at other engines like the mazda kle v6, the rover kv6 and the audi v6, all of which fitted but ultimately it was the sound of the rover v8 that swung it and no body or chassis mods.
Bash
You are only young once but you can be juvenile all your life !!
Top

The strength of that cross member is an obvious concern for me, hence the questions and am happy for any input to help me get to the best answer.

A couple of pics I found of a similar engine - these seem to me to show that the crankshaft does intrude into the sump and right now I can't see too much room for gain in the sump where is is over the cross member. 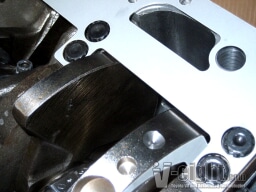 Here is a picture of the cross member - there is some gusseting on the ends although they do look like they were added to fit around whatever was already in that space and/or to fit in with the engine mounts..... 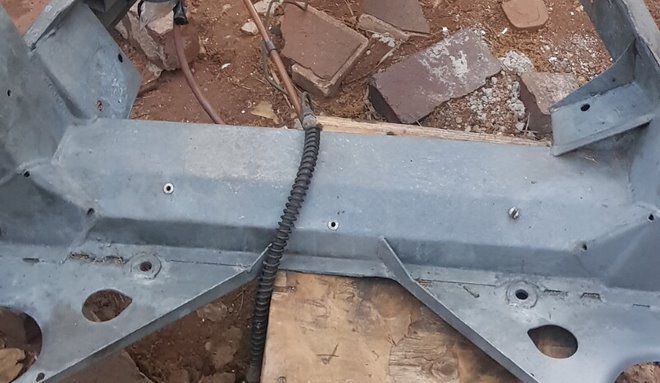 I am not sure how much more the V8 weighs - from various build threads etc. it seems to be around 20kgs or so, but I expect it is more and the 6-speed gearbox won't help, although that weight is much further back.

If I do have to modify the cross member then I would put in extra steel for strength - it is about 74mm deep, and losing 20mm out of that would be significant. Maybe extending any strengthening down and through the bottom plate (which has been fairly well mangled by previous owners using it to jack on) is an option??? I'm no engineer, so am open to suggestions!

Definitely no space for a tower strut unless the engine is used as part of it!

I hope everyone has had a good Xmas!

Managed to squeeze the Lexus engine into the Excel....not without a fight though - it is all very tight.

To get it all in I had to lift the front of the body off the chassis or there just wasn't enough clearance - not a problem when the body isn't on properly, but not something you'd really want to do often.

Everything had to come out the engine bay - all brackets, pipes, air-inlet on the bulkhead etc.

The bonnet will not close - it catches on the throttle body - but it is not far off.

As much as I don't want to, I can't see any way but to change the front cross member somewhat - bearing in mind Dave's note on the factor of 3 that affects the strength of the beam, I have learnt some new engineering maths, and used a few on line calculators to get an idea what the changes will do. A 20mm drop in the depth of the crossmember from 74mm to 54 mm would result in over a 50% loss of strength, I'm hoping a 10mm cutout will be enough, which is about a 30% decrease which is obviously still a problem. The plan is to add in a couple of strengthening plates along the length of the beam that I can access - if done out of 2mm steel and set as wide and deep as possible I should end up with a stronger cross member, and if I make the plates out of 3mm thick steel the calculations show it to be stronger than the original - in theory anyway.... And with the top section rotated 180 degrees and replaced: All gaps will be filled in....either at an angle or with a vertical plate - thoughts on this as well as the plan above will be appreciated.

This will allow me to lower the front of the engine about 15 to 20mm which will leave a 10 to 15mm gap between the sump and the cross-member and also allow the bonnet to close with some clearance. It will also give some space between the bell housing and the body, which is close, and may allow the engine to be installed without lifting the body off the chassis, but this isn't a given. The center line of the crankshaft will also be closer to the figure of 195mm from the bottom of the cross-member (if my memory is right) that Bash gives in his build diary - I never had an engine to check this on. It may also give some extra space for the exhaust manifolds which are going to cause some issues, but are not far off fitting.